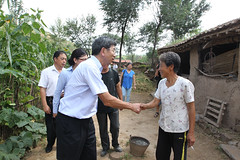 Book review: Three Decades of Cooperation between the Asian Development Bank and China

The Lowy Institute just published John West's review of "Partnership Transformed: Three Decades of Cooperation between Asian Development Bank and the People's Republic of China" by Robert Wihtol.
Multilateral cooperation and the post-war liberal world order seem to be in shambles. The most glaring sign is US President Donald Trump administration’s protectionist policies which are undermining the multilateral trade system. But it is far from being the only example.

Happily, there are also good news stories, even if they are much less publicised. In this vein, Robert Wihtol’s recent book, A Partnership Transformed, recounts the successful story of three decades of cooperation between the Asian Development Bank (ADB) and the People’s Republic of China in support of reform and opening up.

China’s rise to economic power status has been so rapid that it is easy to forget that when China joined the ADB in 1986 it was a low-income and predominantly agrarian economy, and a net importer of both capital and technology. Its GDP per capita was only $282, the vast majority of its population lived in extreme poverty, just 25% of the population lived in urban areas, and its foreign exchange reserves were a mere $2.1 billion.

Having witnessed the spectacular development of its neighbours like Japan, Korea, Hong Kong, and Taiwan, China joined ADB to increase its opportunities to tap into the global market for financing, technical expertise, and knowledge.

As Wihtol reports, the ADB-China partnership became very important. All up, ADB has approved close to $40 billion in financing for China, with almost half going to the transport sector, with the rest split between the energy sector; water and other urban infrastructure; agriculture, natural resources, and rural development; and education, finance, and trade and industry.

ADB’s support initially focussed on China’s eastern coastal region, but then shifted to the central, northeast, and western regions. Wihtol makes a convincing case that the combination of ADB project finance and knowledge cooperation to support policy reforms had a powerful impact on China’s development.

And over the years, the ADB-China relationship has become a “partnership transformed”, as Wihtol’s book is appropriately entitled. China has made important financial contributions to the ADB through the Asian Development Fund and the Poverty Reduction and Regional Cooperation Fund. And just as importantly, unique lessons from China’s stunning development have been incorporated into the ADB’s collective wisdom and shared with other developing economies in Asia.

China and the ADB now have a two-way development partnership:

"[China’s] approach to economic development is gradualist and experimental, often referred to as ‘crossing the river by feeling the stones.’ New approaches are initially piloted in a few selected localities. Once successful, or once sufficient experience has been gained, the innovations are replicated in other parts of the country."

You might think that it is time for China to graduate from its partnership with the ADB. On the contrary, as Wihtol argues, China still stands to benefit from cooperation with the ADB in areas like China’s persistent inequality and regional disparity, environmental degradation and climate change, and the societal challenges posed by a rapidly ageing population.

Most advanced economies have much to learn from the work of the ADB, as they increasingly share many of the challenges of emerging economies, especially when it comes to inequality and inclusive development, the environment, and responding to the unfolding fourth industrial revolution.

One point not mentioned in Wihtol’s excellent and comprehensive book is that the experience gained by Chinese government officials through working at the ADB has developed critical expertise which has enabled China to establish the Asian Infrastructure Investment Bank (AIIB), a welcome initiative in a region with still a massive infrastructure deficit. Indeed, the AIIB’s inaugural President and Chairman of the Board of Directors Jin Liqun is a former vice president of the ADB, and the ADB has very quickly established effective collaboration with the AIIB.

The main shortcoming of Wihtol’s book is that it barely touches on the political challenges that must have been confronted in integrating in China into an organisation so dominated by Japan and the United States. Having spent most of my career in an international organisation, the OECD, I am only too aware of the rivalries and infighting that can occur in the world of international cooperation. In particular, it is noteworthy that while China joined the IMF and World Bank in 1980, it took another six years before it joined the ADB. A formula reportedly had to be found for Taiwan, a founding member of ADB and a close ally of Japan, resulting in protracted negotiations.

The underlying message of Wihtol’s book is that when countries cooperate together through organisations like the ADB, great things can be achieved. In other words, multilateralism still works. We can only hope that the world’s leaders, in this seemingly fracturing world order, will hear this message.