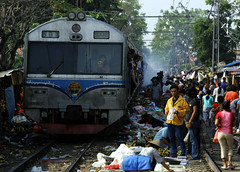 Indonesians -- where do they live?

Indonesia's enormous population of 262 million people is mainly concentrated in Java, and today is increasingly clustered in cities and towns, writes John West.
Indonesia may have some 17,500 islands, but 145 million or almost 60% of its population huddle together in the island of Java (including Bali and Madura). This makes Java the world's most populous island, and one of the most densely populated parts of the world. Another 50 million live in Sumatra, while a mere 19 million live in Kalimantan, 17 million in Sulawesi and 4 million in Indonesian Papua.

Indonesia is essentially an artificial country -- most countries are. It is the descendant of the Dutch East Indies colony, ruled by the Netherlands, and most peoples on Indonesia's many different islands have little in common with each other. Java, which dominates the country, is home to two ethnic groups the Javanese and Sundanese, along with the Madurese many of whom have immigrated to East Java. At the same time, Indonesia is the home to an estimated 50 to 70 million indigenous peoples, originating from other islands. The Indonesian government recognises some 1,128 ethnic groups.

The one thing that seems to tie this country together is its national language of Bahasa Indonesia. At the time of independence in 1945, Bahasa was officially adopted as the national language, rather than Javanese, even though Bahasa was the native language of only about 5% of the population. The reason was that the choice of Bahasa would not divide the nation by favouring the Javanese over the other ethnic groups.

At independence, just one in eight people lived in towns and cities. But since that time, Indonesia's urban population has grown dramatically, as in all other emerging Asian countries, such that 55% of Indonesians now live in urban settlements, about the same as China. Here again, Java dominates Indonesia's urbanisation story. Some 61% of Javanese in urban areas, while less than half of other Indonesians do so -- Kalimantan (44%), Sumatra (40%), Sulawesi (35%), Nusa Tenggara (32%), and Maluku-Papua (31%). About half of Indonesia's urban population live in metropolitan areas like Jakarta, Surabaya, Bandung, Medan and Semarang. The other half live in smaller cities and towns. (1)

Urbanisation can be an important motor for economic development. As China and Vietnam have demonstrated, when rural migrants take jobs in factories operating in global value chains, they work in higher value added activities than back in the countryside, thereby boosting national productivity. But Indonesia's restrictive policies towards trade and foreign direct investment have prevented it from taking full advantage of the economic opportunity of global value chains.

There are other economic benefits of urbanisation. As the World Bank has argued, "As people and firms start to cluster in settlements, urbanization fosters ‘agglomeration economies’: the spatial proximity of consumers, workers and firms creates an environment that is conducive to innovation and enhances productivity. Matching talent to jobs becomes easier, ideas and knowledge are exchanged more frequently, and firms share inputs, fostering the emergence of local suppliers. Urban areas offer more opportunities for specialization, enabling firms to realize larger economies of scale." But poor public transportation and lack of affordable housing results in isolated communities and limits the scope for the agglomeration and scale economies. Price-to-income ratios for housing are high in Jakarta compared with more developed countries.

Urbanisation can also be very rewarding for people’s lives through the cultural and entertainment attractions on offer, and the knowledge to be gained through educational opportunities. And with people moving to cities from many parts of the country, there is also great scope for diverse and enriching social contact, something which is much less on offer in country villages. Urbanisation also provides the means for escaping the conservative social strictures of village life.

But urbanisation is not only a blessing. Unless it is well managed, urbanisation result in massive environmental and congestion costs. There have been various estimates by the World Health Organisation, Greenpeace and others of the thousands of premature deaths, adverse health impacts and working days lost from air pollution alone in Indonesia’s cities. By one estimate, residents of Jakarta get only 27 days of clean air each year. And Jakarta ranked a sad 94th in a list of 100 cities in a recent sustainable cities index.

If you want to waste your life away, just spend some time in a traffic jam in Jakarta or Surabaya, as do many Indonesians due to the lack of adequate public transport. According to the Castrol Magnatec Stop-Start Index, these two cities would have some of the world's worst traffic. The Jakarta Mass Rapid Transit is expected to be open to the public by March 2019, and one can only hope that this will relieve some of this city's traffic congestion problem. But this can never be the end of the story. Based on the experience of advanced Asian countries like Japan or Korea, in which over 90% of the populations are urbanised, Indonesia is only half way through its urbanisation journey.

To enable urbanisation to be beneficial to all citizens, it is essential that governments get their act together and provide affordable housing, clean water, sanitation, education and health services. And access to better amenities can be one of the pluses of urbanisation, since the fixed costs of providing infrastructure can be spread over more people. But while Indonesia’s urban dwellers do enjoy better access to public services, it is also true that it is in Indonesia's cities that we can see most clearly the effects of the country's appalling infrastructure deficit. About 22% of Indonesia's urban population, or some 29 million people, live in slums that lack basic infrastructure. Only 48% of households now have access to safe water. Sewerage coverage exists in only 11 of the country’s 98 cities. Only 2% of city residents have access to centralized sanitation systems.

But when you visit Jakarta, you may not seen these slum dwellers, unless like me you take a tour of Jakarta's slums, as they mostly lived in urban peripheries and non-metro urban areas.

Overall, urbanisation seems to have been beneficial to Indonesia and Indonesians, as reflected in the higher levels of prosperity and lower poverty in urban areas. But urban poverty and slums are now a reality of Indonesia’s urban landscape. So, while urbanisation could be a boon to the Indonesian economy and society, the country still has a long way to go before it fully benefits from this opportunity.