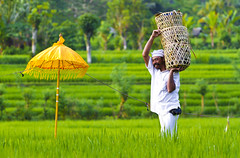 John West discusses Indonesia’s ambitious plans for international tourism.
Indonesia has so much to offer international tourists. Some 17,500 tropical islands. Mountains, volcanoes, jungles, forests. And of course beaches. It also has immense biodiversity with a vast array of native fauna and flora (some dangerous, of course) which has great potential for eco-tourism. And then it has 300 distinct ethnic groups with fascinating cultures.

International tourism also has much to offer the Indonesian economy and society. Tourism typically employs semi-skilled workers (notably women), which Indonesia has in abundance. The enhanced understanding that international tourists learn of a country like Indonesia can foster its soft power. As I have experienced first hand on many occasions, Indonesians are delightful, charming people, with a great gift of hospitality which should be exploited.

International tourist arrivals stagnated in the early 2000s, a period during which it suffered from tragic terrorist attacks, and also natural disasters, notably the 2004 tsunami. But since then tourist arrivals have boomed, almost tripling over the past decade to 13 million (2). International tourism is now Indonesia’s fifth most important source of foreign currency, after coal, palm oil, oil and gas, and textiles.

The government has been promoting tourism, and made visa policy changes, such that citizens of 169 countries can now visit Indonesia for 30 days without a visa. Asia's middle class has also taken to tourism as a new pleasure activity. China is now the largest source of Indonesia's tourist arrivals, overtaking Malaysia, Singapore and Australia.

As promising as that might sound, the disappointing reality is that half of Indonesia’s tourists visit Bali, an island with less than half of 1% of the country’s land mass. Very few other Indonesian destinations are popular with international tourists, other than Jakarta, which mainly attracts business visitors.

Why does Bali have an almost mystical attraction? In the 1930s, anthropologists Margaret Mead and Gregory Bateson, artists Miguel Covarrubias and Walter Spies, and musicologist Colin McPhee all spent time here. Their accounts of the island and its peoples created a western image of Bali as "an enchanted land of aesthetes at peace with themselves and nature." (3)

The sensuous image of Bali was enhanced in the West by a quasi-pornographic 1932 documentary, “Virgins of Bali”, about a day in the lives of two teenage Balinese girls whom the film's narrator Deane Dickason notes in the first scene "bathe their shamelessly nude bronze bodies". The film, which mostly consisted of scenes of topless Balinese women was a great success in 1932, and almost single-handedly made Bali into a popular spot for tourists.

The “uninhibited” lifestyle attracted semi-permanent Western residents, many of them gays fleeing a constricted life back home. A few were talented artists, who, finding inspiration in the vibrant culture and stunning landscapes, produced quality work that further spread the image of Bali among affluent Europeans and Americans.

The hippies and surfers of the early 1970s resurrected the myth of the “Paradise Island”, which was promoted by the government in a bid to generate foreign currency revenue to replace oil-export earnings after the price of oil plunged in the early 1980s.

So Bali is both a blessing and a curse. It is a very important source of export dollars for Indonesia. But even as tourism has been booming in Indonesia, Bali remains the main destination. International travellers can't get past the Bali mystique, which overshadows the rest of this magnificent country.

All up, Indonesia is underperforming in the international tourism business. With 13 million tourists spending $13 billion in 2017, it lags way behind destinations like Thailand and Malaysia which have much less to offer. In 2017, Thailand welcomed over 35 million international tourists who spent over $57 billion, while Malaysia saw almost 26 million tourist arrivals, who spent over $18 billion (4).

The government of Joko Widodo ("Jokowi") has big plans for tourism to boost the economy, especially in light of the volatility of natural resource export revenues, and the lack of success in developing the manufacturing sector. It aims to reach 20 million tourists by 2019. It was planning to develop “10 new Balis”, but has now switched to four priority destinations (Borobudur, Mandalika, Lake Toba, and Labuan Bajo). Aggressive promotional campaigns are being undertaken. New airports are being built. But the country’s poor flight safety record is one factor deterring tourists.

And many of the same factors holding back the whole Indonesian economy, are also making life difficult for international tourism. Poor infrastructure, including for the Internet. Weak education and skills. Restrictions on foreign investment. Government regulations that make it difficult to run businesses. Poor coordination with local governments. And inadequate management of the natural environment which can be a victim of tourism.

Another factor holding back Indonesia’s tourist industry is weak foreign language skills. Singaporeans reportedly favour visiting Malaysia because of the language barrier in Indonesia. And while the English language is a must in the international tourism industry, Mandarin is increasingly important. Indonesia’s education system has lots to do.

The government is making the right noises. Destinations like Yogyakarta and Lake Toba are reportedly attracting more tourists.

But then we still have the mystique of Bali. Class- and status-conscious Chinese visitors will always be attracted by big and famous brands and reputations like Bali. And young Australians who have no need to leave home to find a tropical beach will always be attracted to Hindu Bali by the nightlife, sex and drugs, which are much less available in the rest of Indonesia which remains Muslim, and ever more staunchly so.