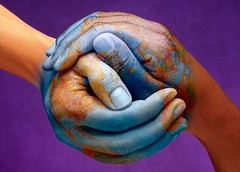 Dr. Reetu Verma makes her argument for peace and fighting poverty.
There is no doubt that considerable progress has been made with regards to well-being of people and reduction in poverty rates around the world. But still, an estimated 800 million ( combined populations of USA and the EU) people live in extreme poverty and suffer from hunger, with fragile and conflict-torn states experiencing the highest poverty rates (UN figures); 5.9 million children under age five died in 2015, that is a staggering 16 000 every day; about 2.6 billion people (half the developing world) lack even a simple ‘improved’ latrine and 1.1 billion people has no access to any type of improved drinking source of water; an estimated 100 million homeless people worldwide and as many as 1.6 billion people lacked adequate housing (United Nations Commission on Human Rights).

Given this and much more, the World Bank’s twin goals of ending extreme poverty by 2030 and boosting shared prosperity among the poorest 40 percent in low- and middle-income countries is commendable but is seems like it is a goal only for a few world bodies. It should be goal that the entire world should strive for – no poverty, better health and well-being for everyone. A win-win situation for all. The United Nations Foundation itself has said, “Unless we can help the world’s poor create a better life, no one’s prosperity can be secure”. But do we have to wait 15 years? Progress towards humanity is an upmost importance and as such, could world peace led to an end of the word ‘poverty’ and a better world? Well yes, all we have to do as one world is to shift our priorities towards peace and well-being for our fellow human beings. So could we see an end to poverty with creating peace on this beautiful earth?

Just look at some facts:

World Bank Group President Jim Yong Kim talking about the twin goals. “We estimate that the world needs an additional US$1 to 1.5 trillion dollars every year to be invested in infrastructure –“. This is below the almost $1.7 trillion last year spent on military expenditure in 2015 (SIPRI).
SIPRI (2016) claims that the military expenditure amounted to 2.3 percent of global GDP and 10 percent of this would be enough to fund the global goals agreed upon by UN to end poverty and hunger by 2030; only 10% reduction! What if there could be a larger reduction?

Plus by Ban Ki moon:

Surely the time has come to shift towards world peace! With raising our consciousness to peace and well-being for all, these high levels of military expenditure can be redirected towards creating a better, a prosperous and a more equitable world.