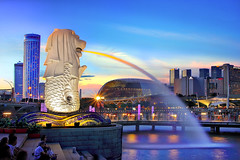 Lee Kuan Yew’s book “From Third World to First” provides a credible defense of Lee’s strategy for Singapore. But its future could be more problematic than it seemed 50 years ago, writes John West.
Although Singapore has been arguably Asia’s greatest success story, it is regularly the butt of many jokes. Here’s one: three men -- an Italian, French man and Singaporean -- are stranded on a tropical island with a beautiful Tahitian lady. The Italian wants to kill the other guys. The French man wants to share the pleasures of the young lady. And what about the Singaporean? He is awaiting instructions from Singapore as to what to do.

Indeed, Singapore is widely regarded as being an authoritarian society where children are taught to be obedient, where workers are required to follow orders, and where citizens must be law-abiding. This makes for a very safe society and an efficient economy. But it also makes for a society and an economy which are not very creative and innovative, and even a little boring.

It is thus not surprising that Western liberals like me usually give Lee Kuan Yew, and the Singapore that he created, a bad rap for the soft authoritarianism, restrictions on freedom of assembly and expression, abuses of human rights, and so on. But a deep understanding of the historical and political context of the Singapore story calls for a more nuanced perspective of this unique city-state. And there is no better book than Lee’s “From Third World to First” to provide those nuances, even two decades after it was published.

As Lee recounts, Singapore had independence thrust upon it, when in 1965 it was ejected from Malaysia, after two years of membership in this post-colonial state. The Malay-dominated Malaysia could not cope with Singapore's large Chinese community. This ejection was a tragic event for Lee Kuan Lee and his fellow leaders of the People’s Action Party (PAP).

Singapore was totally unprepared for independence. And most commentators at the time gave no hope for the survival, let alone success, of this new nation. This statelet of a mere 640 sq. km, had no natural resources, and was surrounded by much larger newly independent nations, all pursuing nationalistic policies. It was a city without a hinterland, and was thus dependent on Malaysia for even its water. It did have however the Straits of Malacca, a critical maritime passageway, which enabled Singapore to be a critical international port.

Lee concluded that Singapore could not be ordinary if it was to survive. It must make extraordinary efforts to "do things better and cheaper than our neighbours". It must also to “build a multiracial society that would give equality to all citizens, regardless of race, language, or religion”. And he was convinced that strong leadership by him and his coterie of leaders in the PAP were necessary for securing Singapore’s future.

Lee was a towering figure, and he and his family have always dominated Singapore’s politics. Lee retired from the prime ministership in 1990, after three decades in the position. He then stayed on as “Senior Minister” and “Minister Mentor” until the age of 87 in 2011, just four years before his death. His son, Lee Hsien Loong, has been Prime Minister since 2004.

A first challenge for Singapore was to get international recognition for Singapore’s independence, including membership in the United Nations. Lee was particularly concerned for the right of small states to exist, and freedom of navigation in international waterways like the Straits of Malacca.

An army had to be created to defend the island, especially from the risk of Malaysian extremists who might wish to force Singapore back into Malaysia. Lee called on the Israelis to help create the army. And an economy had to be fostered, while Indonesia was "confronting" Singapore and Malaysia was seeking to bypass the port of Singapore.

Lee strong-armed Singapore up the development ladder through his decisive, aggressive and enlightened policies.

While most third-world countries were seeking economic independence from the West, Lee made attracting foreign investment from Western multinational enterprises a key element in his government's economic development strategy. Foreign investment was facilitated through infrastructure, industrial estates, equity participation in industries, fiscal incentives and export promotion.

Lee also won over Singapore's communist-dominated trade unions by convincing them on the need to create new jobs by attracting investments. But Lee also thought that it was critical for Singapore to have a fair society, and so he promoted home ownership, health insurance and retirement benefits through the national Central Provident Fund.

Along the way in Singapore's transformation from a third world country to a first world one, many hurdles were overcome. In the 1950s and 1960s, “the communists” had a "psychological grip" on the Chinese-speaking in Singapore and Malaya, which Lee fought bitterly against. In 1969, ethnic Chinese/Malay riots in Malaysia's Kuala Lumpur spilled over into Singapore.

When Britain, Singapore's former colonial master, withdrew most of its troops from the city-state in 1968-1971, the loss of British military expenditure cost Singapore 20 percent of its GDP, and 70,000 jobs. And Singapore had to weather the international oil crisis in 1973, and the quadrupling of oil prices, without any natural resources.

Lee seeks to refute claims that his PAP was able to win every national election by being tough on its opponents. He argues that the PAP was popular because it delivered an era of unprecedented growth and development, and it had a zero tolerance for corruption.

But Lee was also a ferocious opponent of anyone who disagreed with him. International media which "misreported" on Singapore were punished, usually through restrictions on their circulation. And people who criticised Lee were regularly subject to defamation suits.

Looking to the future

Although this book was written some 20 years ago, Lee was prescient when he questioned whether the PAP would continue to dominate Singapore’s politics, and how big a challenge would a democratic opposition pose in the future. As he wrote, “This will depend on how PAP leaders respond to changes in the needs and aspirations of a better-educated people, and to their desire for greater participation in decisions that shape their live”.

This may indeed be one of the greatest challenges facing Singapore today, especially in a context where the mystique of the Lee family is likely to pass from center-stage. Indeed, Singapore now faces the prospect of a post-Lee family future, with the passing of Lee in 2015, and the likelihood that Lee’s son, Lee Hsien Loong, who has been Singapore’s Prime Minister since 2004, will not be followed by a Lee family member.

When it comes to Singapore’s domestic economy, Lee also has sound and predictable advice: “That we have succeeded in the last three decades does not ensure our doing so in the future. However, we stand a better chance of not failing if we abide by the basic principles that have helped us progress: social cohesion through sharing the benefits of progress, equal opportunities for all, and meritocracy, with the best man or woman for the job, especially as leaders in government.” These fine words are today seemingly contradicted by Singapore’s massive inequality, and relatively high poverty.

Lee’s panorama of Singapore international relations is fascinating, with openness and frankness, and great insights into decisions, issues and political personalities from Mao and Deng Xiaoping to Margaret Thatcher and Ronald Reagan. During the Cold War period, Lee’s Singapore sided with the democratic West against the communist world, even though Singapore ever only nominally a democracy. And while it clearly chose the right side in this battle, like the rest of Asia, and indeed the world, it is now being shaken by the rise and assertiveness of China, and the erratic behaviour of the US.

In this context, Lee questions what the future has in store for Singapore. After all, “City-states do not have good survival records. The Greek city-states no longer exist as states”, he notes. Again Lee is remarkably frank when he argues that “To remain an independent nation, Singapore needs a world where there is a balance of power that makes it possible for small states to survive, and not be conquered or absorbed by larger countries”. And of course today, Asia’s balance of power is being threatened by the assertiveness of China.

I have always thought that Singapore has been managed more like a corporation than a country. And while I may have misgivings about Lee’s style of management and governance, it is difficult to not respect his brilliance, and also difficult to imagine how Singapore’s great success could have achieved with a more democratic system. But as Lee himself suggests, although Singapore’s future seemed problematic half a century ago, the next half century could well be even more interesting.

Lee’s book is quite simply a masterpiece, and is essential reading for anyone interested in Asia, and not only “a younger generation of Singaporeans who took stability, growth, and prosperity for granted”, for whom Lee wrote this book.