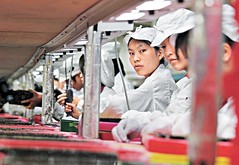 Working for Apple in China

Working conditions for employees of Apple's China-based subcontractors may be improving. But they are still a long way from the objective of "decent work", writes John West.
Like many information technology companies, Apple outsources the assembly of its iPhones, iPads, iPods and so on to China-based companies, notably the Taiwanese contract manufacturers, Foxconn and Pegatron.

This enables Apple to exploit China's comparative advantage based on its relatively low-cost labor. Most of the workers employed by these companies are immigrants from China’s distant provinces, and thus part of China’s “floating population”.

This also enables me and you, dear reader, to buy affordable products. But this also helps Apple make massive profits.

Jobs at these Chinese factories are very much sought after because they usually pay quite well by Chinese standards. But in recent years, there has been a series of horror stories about the sweatshop working conditions.

The horror stories include: forced excessive working hours (over 60 hours week); paltry wages; living in crowded dormitories; exorbitant obligatory payments for living expenses; exposure to toxic chemicals; coercion of students to work as interns; child labor; and substantial use of 'dispatch workers", who have employment contracts with an agency, but not directly with the factory, meaning that they are deprived of benefits and protections.

It is perhaps not surprising that in 2010 there was a spate of 14 suicides at Foxconn's factories. Foxconn responded by increasing wages, installing suicide-prevention netting, conducting prayer sessions with Buddhist monks, and asking employees to sign no-suicide pledges.

For its part, Apple also responded swiftly by establishing a Code of Conduct for its suppliers, conducting factory audits, pressuring its assemblers to improve working conditions, and preparing an annual Apple Supplier Responsibility Progress Report.

In its 2016 Report, Apple's Chief Operating Officer, Jeff Williams, said "At Apple, we are deeply committed to making sure everyone in our supply chain is treated with the dignity and respect they deserve. Our team works hard to raise the bar every year to improve working conditions, provide educational opportunities, push for higher standards of living, and protect human rights".

In 2015, Apple conducted 640 audits across its global supply chain, over 20% of which were first time audits. Importantly, Apple's supply chain extends way beyond China, as it employs more than 1.6 million people in 20 countries. In China, the supply chain mainly conducts low value added assembly activities.

Apple's report presents an impressive story of Apple's efforts across its supply chain, and generally very impressive compliance scores. But scratching through the details of the report, you will find that there was only a 66% compliance with Apple's standards of excellence for "wages, benefits and contracts".

In other words, despite Apple's hype, all is not yet well across Apple's supply chain.

Other signs of troubles were also identified by some BBC reporters, and also by China Labor Watch.

Poor treatment of workers in Chinese factories which make Apple products was discovered by an undercover BBC investigation in 2014. It found that standards on workers' hours, ID cards, dormitories, work meetings and juvenile workers were being breached at factories operated by the Taiwanese contract manufacturer, Pegatron, on the outskirts of Shanghai.

One undercover BBC reporter, working in a factory making parts for Apple computers, had to work 18 days in a row despite repeated requests for a day off -- in violation of Apple’s Code of Conduct, which requires a rest day once every seven days. Overtime is supposed to be voluntary, but none of the reporters were offered any choice.

In addition to the excessive hours, one reporter had to attend unpaid meetings before and after work. Another reporter was housed in a dormitory which 12 workers shared in a cramped room. The BBC also filmed a health and safety exam at the Pegatron factory in which workers chanted out answers in unison, meaning there was little chance of failing.

In response to the BBC report, Apple’s Jeff Williams merely said that “Tim (Cook) and I were deeply offended by the suggestion that Apple would break a promise to the workers in our supply chain or mislead our customers in any way … We know of no other company doing as much as Apple does to ensure fair and safe working conditions, to discover and investigate problems, to fix and follow through when issues arise, and to provide transparency into the operations of our suppliers”.

More recently, in 2015, China Labor Watch uncovered a similar story at a Pegatron factory in Shanghai. One of its investigators was hired at Pegatron as a production line worker.

According to the report of the labor rights’ organization, the awful working and living conditions that Pegatron workers faced in 2015 were generally no better than those witnessed in 2013.

Young production workers toil six days a week in 12-hour shifts. But each day they are only paid for 10 and a half hours, not counting 15 minutes of unpaid meetings.The mandatory overtime shift runs from 5.30 pm until 8.00 pm. 71% of the pay stubs collected in October 2015 showed average work weeks that exceeded Apple’s self-imposed 60-hour limit.

After their long shifts, workers take a 30-minute shuttle bus back to their dormitories where up to 14 people are crammed into a room. Mould grows pervasively along the walls. Bed bugs have spread throughout the dormitory, and many workers are covered in red bug bites, reports China Labor Watch.

In addition, workers receive inadequate training. Despite only receiving eight hours of training, Pegatron makes workers sign a document that certifies that they have undergone 20 hours of training. Workers are also exposed to toxic chemicals without adequate protection. And half the workers are temp workers, even though the Chinese law only permits 10%.

It is understandable that workers’ wages should be low in a relatively poor country like China. But as Apple says itself, workers in its supply chain deserve to be treated with the dignity and respect. Despite the protestations of Apple CEO Tim Cook and other Apple senior management, Apple still has a long way to go to achieve this objective.