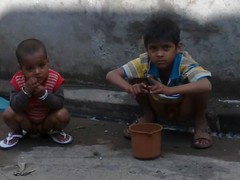 As the world celebrates Asia's dramatic reduction in "income poverty", it is too often overlooked that there has been much less progress in tackling other dimensions of Asian poverty, writes John West

Asia was thus able to achieve the UN Millennium Development Goal (MDG) of halving its rate of “income poverty” over this period, some ten years ahead of schedule.

But Asia's record is much less rosy when it comes to other dimensions of poverty like underweight children, under-5 and infant mortality, maternal mortality, skilled birth attendance, antenatal care, and basic sanitation. Sure, progress was made, but not enough to achieve the MDG goals by the year 2015.

And it's large countries like India, Indonesia and Pakistan that have some of the worst records for these other dimensions of poverty, even though they more than halved their income poverty well ahead of schedule.

The lesson is that Asia’s rapid economic growth has been very effective at putting money in people's pockets. But that Asian governments have been much less effective in providing their citizens with the basic social services that they need and deserve.

Perhaps one of the most egregious deprivations from which many Asians suffer is the lack of "improved sanitation" or, in plain English, clean, safe and hygienic toilets.

Today, while less than 500 million Asians suffer from extreme income poverty, some 1.7 billion or 42% of the region's population still lack access to clean, safe and hygienic toilets, according to the Asian Development Bank. Close to half of Asia’s “toilet-poor” population lives in India.

And while the region’s toilet deficit was mainly a rural phenomenon, this problem is now becoming increasingly acute in urban areas, with tens of millions of people now migrating every year into slums and other infrastructure-poor urban areas.

Of these 1.7 billion toilet-poor Asians, 540 million use public or some kind of shared sanitation facilities. Another 400 million use facilities that do not meet minimum standards of hygiene. And 760 million people still practice open defecation. In practical terms, this means that people relieve themselves behind bushes, in fields, by roadsides, or at some other unsavory and unsafe place.

India has nothing short of a “toilet crisis”. In fact, many more Indians have access to a cell phone than a toilet!

This emerging economic giant wins the prize for the world's longest toilet queue, with some 775 million people without access to clean, safe and hygienic toilets, according to WaterAid's report, "The State of the World's Toilets 2015". China comes in runner up with 330 million people without toilets, while Indonesia is fourth-place (100 million), Pakistan sixth place (69 million) and Bangladesh seventh place (63 million).

If these 775 million Indians without toilets, more than 60% of the nation’s population, were lined up in a queue, it would stretch from the earth to the moon and beyond. In multicultural India, Sikhs and Christians have the highest access to toilets (over 70%), while Hindus have the lowest access (45%).

In percentage terms, the toilet situation in India is much worse than in virtually all other Asian countries. For example, in Cambodia 58% of the population is without toilets, in Nepal 54%, in Bangladesh and Indonesia 39%, the Philippines 26%, China 24% and Vietnam 22%.

Among those Indians that do have toilets, there are many millions who use homemade toilets, on a raised platform inside the house, which are not connected to a sewerage network or pit. So this human waste is then cleaned by poor Dalit women (“untouchables”) who face horrific discrimination.

India also wins the world prize for the most number of people practicing open defecation, with 173 people defecating in the open for every square kilometre in the country. It seems astonishing that many Indians continue to relieve themselves in the open, but keep their homes spotlessly clean.

Poor sanitation can have dramatic effects on people’s health. Inadequate sanitation pollutes water supplies, rendering them unfit for drinking, irrigation, and other purposes. About 80% of untreated sewage in India reportedly flows into rivers, lakes and ponds, and then often seeps underground thereby polluting drinking water sourced from groundwater.

Diarrhoea is a major problem, which is caused by poor sanitation and hygiene practices and unsafe drinking water. It is a major cause of child malnutrition, disease and death. Nearly half of India’s under-five children are stunted (too short for their age), with poor sanitation being a major underlying cause. More than 140,000 children younger than five years die each year in India from diarrhoea. India also has high rates of maternal and newborn mortality linked to sepsis.

Open defecation also puts the safety of women and girls at risk. They are often subject to sexual harassment, physical assault and rape on the way to and from their defecation site.

World Bank estimates that India loses 6% of GDP because of poor sanitation, while poor quality sanitation reportedly costs Vietnam 1.3% of GDP, the Philippines 1.5% of GDP, and Indonesia 2.3% of GDP.

Indian Prime Minister Narendra Modi announced in October 2014 his Swachh Bharat (Clean India) Mission. The objective is to deliver a toilet to every household and end open defecation by 2019, the 150th anniversary of Mahatma Gandhi’s birth, and to educate people about the long-term health and economic benefits of using a toilet.

Some progress is being made, but the government’s toilet construction is way behind schedule, and may take an extra ten years. But building toilets is the easy part. The waste management system across large parts of the country is a stinking mess. Most villages have no systems for disposal of drainage water, and urban areas cannot manage their waste.

But what is more disturbing is that, according to many reports, the new toilets are frequently not used. Many people consider toilets to be unclean, and prefer open defecation. They have been demolishing the new toilets or using them for other purposes.

The government must also tackle the cultural reasons for India’s toilet crisis. Simply building the toilets won’t be enough. It is necessary to improve community awareness of the connection between faecal contamination and health and disease.

Hindu tradition encourages defecation in the open, far from home, to avoid ritual impurity. So many people, notably in the Hindu-dominated Gangetic plains, today still show a preference for going in the open—even if they have latrines at home. Some Indians argue that open defecation is more wholesome, healthy and virtuous life. It is pleasurable, comfortable and convenient!

Tackling India’s toilet crisis requires a multifaceted strategy, with strong leadership. It requires an effective public education campaign, investment in sewerage systems as well as toilets, and cooperation between different levels of government in this vast country.

India should also look to the examples of Bangladesh and Nepal, much poorer countries, which have made great strides in eliminating open defecation. China and Vietnam are also two cases which have had a lot of success in improving sanitation and cleaning rivers and cities by building large wastewater treatment plants.

- Making It Happen: Technology, Finance and Statistics for Sustainable Development in Asia and the Pacific. UNESCAP, ADB, UNDP.

- Water and Sanitation in Asia and the Pacific. Policy Brief. World Vision.

- Why sanitation in Asia requires more than just toilets. DW.com