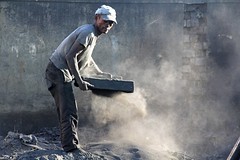 Can India follow East Asia's industrialisation path? John West reports on discussions at the Asian Development Bank Annual Meeting in 2016.
India has the world's fastest growing large economy, with GDP increasing by 7½%, while the Chinese economy is now stumbling. It is not surprising therefore that India should be at the centre of discussions at the recent Asian Development Bank (ADB) Annual Meeting in Frankfurt.

Despite India’s current success, looking back over the past couple of decades, India's economic performance has been a disappointment, especially compared with China and some other East Asian economies, in part due to an inability to develop its manufacturing sector. The key issue is whether India can now follow East Asia's path of industrialisation, according to the ADB.

"The only successful model of modern economic development is that of East Asia," said Hun Kim, Director General for South Asia at the ADB. "The East Asian model involves a structural transformation of the economy as low-productivity rural labour moves to urban areas to work in export-oriented factories."

But East-Asian style urbanisation and industrialisation has not taken place in India, despite the country’s relatively strong economic performance. "India's manufacturing sector has been stuck at around 15% of GDP", said Mr Kim. "The services sector, especially business process outsourcing and tourism, has been a key driver of the economy".

Today, industrialisation could play an important role in India’s development, since it faces the challenge of creating jobs for millions of semi-skilled young people entering the labour market, and transforming this demographic bulge into a dividend. “Fortunately, Prime Minister Narendra Modi’s government wants to develop its manufacturing sector”, said Mr Kim. “India is very keen to join the global value chains of Southeast and East Asia, following in the footsteps of Bangladesh’s success.”

“Major investments are being made in improving the country’s logistics in areas like coastal shipping, highways, and railways, which would help move products around”, said Mr Kim. “Inspired by the government’s “Look East” policy, these efforts are being concentrated on the eastern side of the country, which is close to fast-growing Bangladesh and Southeast Asia. Special economic zones and economic corridors are also being developed.”

The government has liberalised some policies for FDI, including through a “Make in India” initiative, and net flows of FDI surged to $32 billion in 2015, nearly 26% higher than in the previous year, according to the ADB. Leading companies like Foxconn, Softbank and Microsoft all have plans to invest in India. “Korean companies have been very successful in India”, said Mr Kim. “Koreans are like jazz-players, they know how to improvise in different markets.”

“South Asia has been the least economically integrated region of Asia, and there is much to do to catch up in terms of cross-border infrastructure, connectivity and logistics”, said Mr Kim. “At last, India, Bangladesh, Bhutan and Nepal are now gradually becoming more connected through road and other links.”

Improving the quality of education and skills will also be critical for India to exploit the full potential of its youthful and energetic workforce, and promote industrialisation. True, the average years of schooling in India has increased dramatically over the past couple of decades. But this has not been enough to produce sufficiently skilled workers to fully meet current or future demands.

“We are optimistic about India’s future”, said Mr Kim. “A lot remains to be done. But India’s economic performance will only continue to improve, though not at the pace of East Asia. In India, things move more slowly. Even when there is new direction from the country’s leadership, for things to really move, everyone must be on board in India. And this takes time.”